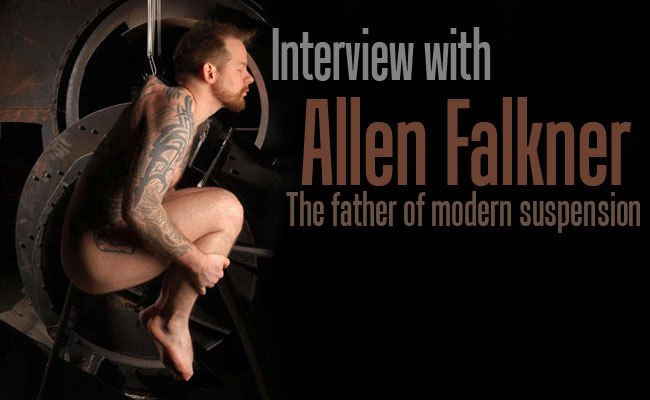 Reflections about the contemporary body suspension take us automatically to Allen Falkner, known as the father of modern suspension.
I’ve been hours studying his trajectory, I have been waiting days for every single answer and full of pride, admiration and respect we bring to you all an exclusive interview with one of the most important names on body suspension of the world!

T. Angel: Among the most important influences in your work are the book “Modern Primitive” (1986) and the artists, Stelarc and Fakir Musafar. Any other name could be added in this list?
Allen Falkner: Of course I can always add names to the list, but I think the most important of those is Jim Ward, founder of Gauntlet. Without his contributions to the piercing industry, body modification, as we know it would be a very different and my life would never be what it is today.

T. Angel: You said that you first suspension (a coma, 1992) was quite traumatic. How long do you feel prepared for a second attempt? Tell us a little about this process and how was the second experience.
Allen Falkner: After my first suspension, I really wasn’t sure if I wanted to hang again. I think my motivation had more to do with trying to figure out what went wrong than an actual desire to suspend. Before I attempted my second suspension, I experimented with pulls and flesh ripping. I was quite surprised how much weight the skin could take and also the amount of tension I could put on a single hook by slowly pulling and building pressure.
Once it came time to do the second suspension I was much more prepared, not only mentally, but our technique and process had advanced dramatically.

T. Angel: In 1993 you start to suspend people. Could you describe the sensation of the first time?
Allen Falkner: I think the best word to describe my experience was, unprepared. I had no clue what I was doing and only the most rudimentary suspension skills, if you can even call them that. The first person I ever hung was my roommate, Ron. (aka Spoony) We used tiny fishhooks, probably not much bigger than 16 gauge, and we used a lot of them. I’m guessing at least 30 hooks. The suspension went well with only a few problems. I think the best way to describe the experience was exhilarating and frightening.

T. Angel: In 2001 you had 30% of your body tattooed, 8 years later there is still some space?
Allen Falkner: In 2001 I had my full back, right arm, sides and my abdomen tattooed. Now I have my left arm, my chest, armpits and few other places, left side of neck, part of my hands and my a piece on my scrotum, but my legs and butt are still uncovered. I guess this brings me up to about 50% coverage. One day soon I will start on my legs, but I have yet to map them out and I want the pieces to be well done. So, I am taking my time and when the time is right I will start on them.

T. Angel: You became a great specialist in male genital piercing, through your contact with the gay community. Where and when was it exactly?
Allen Falkner: I opened my first shop Obscurities in 1992. I sold that shop in 2007, but that’s another story all together. Two old friends of mine Jenneane and Buddy owned a vintage clothing store in the heart of the gay community. They had a back room they weren’t using that they rented out to me for the shop. At the time I knew very little about the community, but I am open-minded and everyone was super friendly. It wasn’t long before the piercing craze took off and I was incredibly busy. Besides all the gay men that were coming in for genital piercings, many of the other shops in town were refusing to do male genitals and they often sent them to me. Suddenly I became the go-to guy to have your penis pierced.
It was rather funny but I used to tell people all the time, “I own a successful business in the gay and lesbian area. I have hundreds, possibly thousands of gay male fans. I handle cock all day at work. If I was gay, my life would be perfect.”

T. Angel: You already been at Brazil, tell us your experience here?
Allen Falkner: My mother is Brasilian, so Rio and Sao Paulo are my homes away from home. I’ve only ever been twice, but I love Brasil. There was once a time when I was looking into dual citizenship and thinking about trying to work there. My idea was to work in the US, 6 months then Brasil 6 months so I could have an endless summer. Unfortunately it just didn’t work out. Plus my Portuguese is terrible. I understand very little these days and I speak even less. But, in answer to your original question, I love Brasil and hope to make it back again some day.

T. Angel: Nowadays we have a big number of people doing suspension and by the several possible reasons. What’s your conception about the current suspension’s scene?
Allen Falkner: Suspension has been growing all over the world, but unfortunately most people don’t have any training. Luckily, this is starting to change. More and more I see people coming together forming groups, and these groups are starting to travel to work with other people to improve their skills. I still think the suspension community needs more education and better equipment. Also, we need to work together. People in the body modification world often work alone. This needs to change. The more we work with each other, the more we learn and ultimately the safer our art becomes.

T. Angel: How is your work with the TSD?
Allen Falkner: These days my main focus is on teaching and helping the community. I still hang regularly, but am basically retired from performing. I love suspension, but I’m getting too old to keep putting on crazy shows, I will leave that to the younger generation.
Now my I devote most of energy to helping spread education. Back in April I organized a suscon that was designed for practitioners. We had class on suturing taught by Brian Decker or ROP suspension group. A performance roundtable led by Steve Joyner of CoRE and Havve Fjell from Wings of Desire/Pain Solution. We even had a rigging class taught be a Cirque Du Soleil rigger. Although the suscon had it’s problems, I feel that everyone walked away from the convention with more knowledge and better understand of suspension safety and dynamics.

T. Angel: Do you work as a piercer yet?
Allen Falkner: I guess I still work as a piercer, but it’s been a while since I’ve done any piercing. When I sold my shop in 2007, I changed my focus to laser tattoo removal: www.fadefast.com I know this might seem like a strange transition but it’s really not. Now I work with heavily tattooed people to lighten existing work so they can get it recovered with a better piece. I don’t see lasers as anti-tattoo. I see them as the next logical step in improving bad tattoos

T. Angel: For you, what’s the future of suspension?
Allen Falkner: Who knows what the future holds? I think suspension will continue to gain popularity and the art will become more accepted by the average person.
As for me, I want to keep focusing on education, improving our equipment and establishing better safety protocols. The suspension community is growing so fast, but our knowledge doesn’t seem to get passed along fast enough. My goal is to teach and to learn from as many suspension practitioners as possible. If I could spend all my time traveling and focusing on suspension I would. Maybe one day I can afford to do that.

T. Angel: Leave a message for every people who admire your work, especially for us, brazilian!
Allen Falkner: If you are interested in getting involved in suspension please do your research. There is lots of information out there and so many people that want to help you. Don’t go at it alone. Suspension is a dangerous activity and should only be attempted under supervision of trained professionals.

1 thought on “Interview with Allen Falkner”