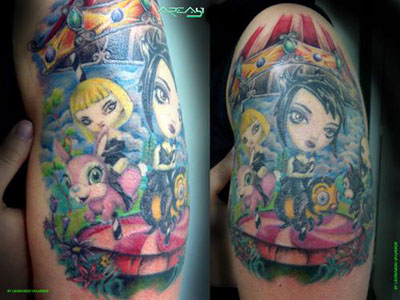 Interview:
Leonardo Valverde, tells us a little about his career in the Tattoo’s World!

Leonardo Valverde, 30 years old, one of the best tattooer in Uruguay.
He is responsible for the organization of Tattoo Conventions and for of the unique
tattoo magazine that was in circulation there, he tells us about his career and
the uruguayan body mod scene.
Frrrk Guys: What was your motivation to start tattooing?
Leonardo: I started to tattoo when I was 15 years old.
I always loved drawing. I liked it and I was interested in drawing, that’s the principal basis for tattooing. I got the first tattoo machines that were very basics…
To start tattooing you need the help guide from an artist, because there’s nothing that really teaches you how to tattoo. With that little help guide and with self-improvement I learnt tattooing.
To work as a tattoo artist I’ve spent 3 years developing the technique…

Frrrk Guys: What were your influences?
Leonardo: The influences spring up year by year, and step by step, you start to know new artists. In the beginnings it was so hard to know good artists because we got few materials and they were very limited. After the knowledges’ doors open, you start to know artists from all around the world and see their great works.
As direct influences, all good tattooer is a good influence for me, his/her works and not the tattooer indeed. I appreciate how she/he works, the style, the design, the composition… it’s an influence to work my style.

Frrrk Guys: Do you have any particular style?
Leonardo: The search for the style of a tattooer is an eternal search. My style is definided for a period of time, and then it changes a lot in a short period of time, but to define permanently my style… no.
I work very well all the styles that are pre-established on the tattoo scene. Nowadays I’m really exploring something more personal in the design and composition of tattoos after 12 years of proffessional tattooing.

FrrrkGuys: Tell me about Tattoo and Piercing Conventions in Uruguay.
Leonardo: They were 5. The first one was in ’98, the second was in ’99, and the next took many years to make it real because doing an event of that magnitude here in Uruguay is hard. The last one was in 2005. We could make the event with approximately 80 national and international artists.
It was recognized in the Uruguayan scene, and it was the bigger event inside this movement.

Frrrk Guys: What is going to happen with the Uruguayan Conventions? Because you are going to live and work in Europe in a few days.
Leonardo: There should be new people who want to make something in this scene. In our case, we were Eduardo Sasía, Guzmán Tasende and me who were fascinated in promoting the tattoo scene by means of the conventions and other things, and now we are a little dissapointed and tired because the uruguayan public, and the artists fight for different reasons instead of fight everybody together for the final product to continue growing and in that way, we can continue growing as artists.
To make real a new uruguayan scene there should be people which don’t exist right now, who want to fight and make effort to create this. There should be an artists union to make it accomplished as it was in 2000. It’s a problem of the uruguayan public too, because we are a minority and defined in this scene.

Frrrk Guys: What are the greatest uruguayan names in the Body Mod scene either here in Uruguay and abroad? Of course I’m including you in this list.
Leonardo: National artists I can say Eduardo Sasía (Estudio: Evolución Tattoo), Gabriel Callico (Estudio: Callico), Guzmán Tasende.
Victor Portugal was one of the first uruguayan artists who was recognized abroad, specially in Spain and beacuse he travelled (he was one of the first artists in flying abroad) and was in many conventions, and that was a help for him because his works were exposed and published in magazines from all around the world. Obviously his artistic quality is really good, it’s over many others.
And in respect of international artists, there are many. I can say Guy Aitchinson, Paul Wood, Robert Hernandez… more or less, they’re the basis of artistic quality.
Frrrk Guys: I know what happened with the Uruguayan Magazine ‘Cuerpo Cultura’ which had no success. What do you think it happened with the magazine?
Leonardo: The minor market that we have here could be one of the reasons. It’s a topic to analyse because not many things have success in Uruguay, even more when they have a minor market. In particular, when the group of people is puntual and defined…
Because of that, the project died in its beginnings.

Frrrk Guys: What do you think about the Uruguayan Body Mod Scene?
Leonardo: The Uruguayan Body Mod Scene is practically null, because we are a minority, and we don’t have such a big market. The fact that there isn’t a defined market makes difficult to expand the scene in respect of ‘extreme’ body mods, or to see people more tattooed as we can see in Brasil or Argentina.
The uruguayan don’t incorpore it as he could.

Frrrk Guys: What does tattooing mean for you?
Leonardo: Ufff… Tattoo is everything for me. It’s a way to express, but it has an external sharing because it’s a product for the client, and we are like the mediators between the client’s expression of his/her ideas and his/her skin. Each tattoo is shared, it’s an experience that I live, and the client shares it with me, which I get, I process it and then, every tattoo makes me grow up or make me know things that I wouldn’t know by myself. It’s really a good feeling.
If we talk tattoo as an art, as a design of something, the creation is the principal thing for me, from its realization, to get an attractive final product, that makes it comfortant and makes me grow up as an artist.

Frrrk Guys: A message to the reader …
Leonardo: The tattoo scene is a world which has too many things to offer either for tha tattooer, the tattooed, or someone who just admire the tattoo. It’s really good to know that, and after you know this world, another doors open to you.
Uruguay is a slowly country, and I think maybe in 20 years it could be an interesting scene because year by year new artist come out and people are more interested in tattoos.
There is a general approval of tattoo.
Uruguay has just got away from that myth, that taboo as the tattoo was seen.
The growing is slowly, but with some lucky, there could be an important movement here.